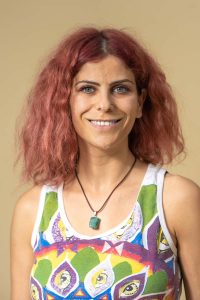 Samar Zughool (She; her / They; their) started her journey as a performing artist and non-formal educator in 2004 in Jordan, where she used forum theater and its based techniques for public awareness-raising on reproductive health rights, human rights, and justice. In 2013, she worked through the Anna Lindh Foundation in Slovenia as an experiential trainer using dialogical arts for intercultural and critical learning. Currently, she is leading international and local programs where she co-creates community performances with people who identify as women and are migrants in Slovenia for citizenship beyond borders and out of gender and ethnic profiling. Her formal educational background is on the impact of social movements on public policymaking; she conducted her master’s thesis on the role of women’s rights movements in reforming public policies after the Arab spring in Jordan and Tunisia, which was awarded the Slovenian national award “Prešeren award for students” from the faculty of social sciences in Ljubljana in 2019. In her work, she focuses on the Mediterranean region; currently, she leads the #RiseForGenderEquality regional action that employs art-based techniques for critical thinking toward gender equality, opt-out of profiling, and beyond borders.